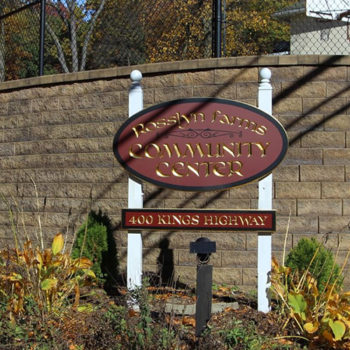 From 1910 until the late '60s, Rosslyn Farms supported its own elementary school, educating children in grades one through eight. Two grades were taught in each classroom, much to the benefit of the students. In 1966, under state mandate to consolidate small school districts, Rosslyn Farms joined Carnegie and Crafton to create the Carlynton School District.

From 1969 until 1972, the building was home to the Kindergarten program for the new school district. It became the administrative center for the district from 1972 until 1975. The building then sat vacant for a year until it was purchased by the Borough in February, 1976, for $15,000 for use as a community center. Once again, Rosslyn Farms had its beloved "old schoolhouse," the hub of community life.

Currently the building houses a large meeting/party room with kitchen and an auditorium/gymnasium which are available to rent.

The Rosslyn Farms Community Center has now reopened and available to rent with some COVID 19 restrictions and requirements. The Calvert Room (upstairs) is a large meeting/party room with a full kitchen and the auditorium/gymnasium (downstairs) are each available individually or together. Renters are responsible for setup, teardown and clean-up. Contact Isabel Ford to rent or for more information.